VTEC is one of Honda's greatest invention. Though an undisputed expert in turbocharging as evidenced by years of Formula-1 domination while Honda was active in the sport, Honda's engineers feels that turbocharging has disadvantages, primarily bad fuel economy, that made it not totally suitable for street use. At the same time, the advantages of working with smaller engines meant that smaller capacity engines with as high power output as possible (ie very high specific-output engines) are desirable for street engines.
Thus Honda invented VTEC which allows it to extract turbo level specific output from its engines without having to suffer from the disadvantages of turbocharging (though VTEC introduces disadvantages of its own).
The Temple of VTEC is specifically created by Jeff Palmer as a dedication to this great technology and the Temple of VTEC Asia is dedicated to the home of VTEC -and of Honda, Japan and the region of Asia.
In this permanent feature, we will examine the basic mechanism that make up the VTEC technology as well as the various implementations of VTEC.

[SIZE=+2]The basic mechanism used by the VTEC technology is a simple hydraulically actuated pin. This pin is hydraulically pushed horizontally to link up adjacent rocker arms. A spring mechanism is used to return the pin back to its original position.
[/SIZE]

The VTEC mechanism is covered in great detail elsewhere so it is redundant to go through the entire mechanism here. Instead we will look at the basic operating principles which can be used in later sectionse to explain the various implementations VTEC by Honda.
To start on the basic principle, examine the simple diagram below. It comprises a camshaft with two cam-lobes side-by-side. These lobes drives two side-by-side valve rocker arms. [SIZE=+2]The two cam/rocker pairs operates independently of each other. One of the two cam-lobes are intentionally drawn to be different. The one on the left has a "wilder" profile, it will open its valve earlier, open it more, and close it later, compared to the one on the right. Under normal operation, each pair of cam-lobe/rocker-arm assembly will work independently of each other.
[/SIZE]


The pinacle of VTEC implementation is the DOHC VTEC engine. The first engine to benefit from VTEC is the legendary B16A, a 1595cc inline-4 16Valve DOHC engine with VTEC producing 160ps and first appearing in 1989 in the JDM Honda Integra XSi and RSi. 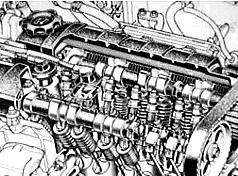 [SIZE=+2]Examine the diagram of a typical Honda DOHC PGM-Fi non-VTEC engine on the left, in this case the 1590cc ZC DOHC engine. Note that each pair of cam-lobe and their corresponding rocker arms though adjacent, are spaced apart from each other.
[/SIZE]

[SIZE=+2]In the DOHC VTEC implementation, Honda put an extra cam/rocker in between each pair of intake and exhaust lobes/rockers. The three cam/rocker assemblies are now next to each other. The new middle lobe is the "wild" race-tuned cam-lobe. Using VTEC to link up all three rocker arms together, Honda is able to use either the mild or the wild cam-lobes at will.
[/SIZE] 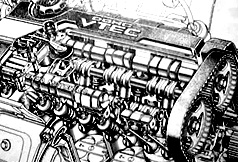 Note : Though the ZC and B16A are well-suited to illustrate the difference between plain-DOHC and DOHC-VTEC, the B16A engine is not derived from ZC. In fact, ZC and B16A have different bore and stroke. The same applies for the B18A and B18C engines used in the JDM Integra series.
DOHC VTEC implementations can produce extremely high specific outputs. The B16A for standard street use first produced 160ps and now 170ps. In the super-tuned B16B implementation used for the new JDM EK-series Honda Civic Type-R, 185ps was produced from the same 1595cc.
DOHC VTEC can also easily offer competitive power outputs to turbocharged engines for normal street use. For eg, the E-DC2 Integra Si-VTEC produces 180ps from the 1797cc DOHC VTEC B18C engine. This compares favourably to the 1.8l version of the RPS-13 Nissan 180SX which uses a 1.8l DOHC Turbo-Intercooled engine which produced 175ps.


An alternative implementation of VTEC for high (versus very high) specific output is used in Honda's SOHC engines. SOHC VTEC engines have often been mistakenly taken as a 'poor' second-rate derivative of DOHC VTEC but this is not the true case. An SOHC engine head has advantages of a DOHC head mostly in terms of size (it is narrower) and weight. For more sedate requirements, an SOHC engine is preferable to the DOHC engine. SOHC VTEC is a power implementation of VTEC for SOHC engines with the express intention of extracting high specific output. [SIZE=+2]Examine the diagram of a standard SOHC cam assembly on the right. Note that the pair of intake rocker arms are separated but adjacent to each other.
[/SIZE] 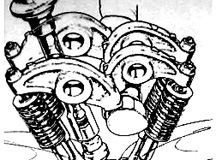 [SIZE=+2]
In the SOHC VTEC implementation (diagram on the right), Honda put a wild-cam lobe for the intake valves in the space between the two rocker arms. Note that the two exhaust rocker arms are separated by the two intake rocker arms and the "tunnel" for the sparkplug cable connector. This is the reason why Honda implemented VTEC on the intake valves only.
[/SIZE] 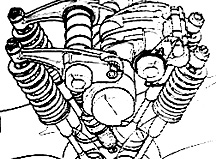 SOHC VTEC engines are high specific output forms of the standard SOHC engines. The D15B engine used in the Civic/Civic Ferio VTi models (EG-series 1991 to 1995) gives 130ps from a 1493cc capacity. Bear in mind this kind of power levels are normally associated with 1.6l DOHC or even milder-tuned 1.8l DOHC fuel-injected engines !


A novel implementation of VTEC in SOHC engines is the VTEC-E implementation (E for Economy). VTEC-E uses the principle of swirling to promote more efficient air-and-fuel mixing in the engine chambers. VTEC-E works by deactivating one intake valve. Examine the diagram below. 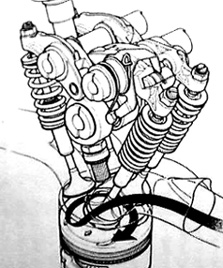 [SIZE=+2]In the SOHC VTEC-E implementation, only one intake cam-lobe is implemented on the camshaft. Actually it is really a flat "ring". In operation this means the relevant rocker arm will not be activated causing the engine to effectively work in 12-valve mode. This promotes a swirl action during the intake cycle. VTEC is used to activate the inactive valve, making the engine work in 16-valve mode in more demanding and higher rpm conditions. Honda was able to implement air-fuel mixture ratios of more than 20:1 in VTEC-E during the 12-valve operating mode. The SOHC VTEC-E engined EG-series Civic ETi is able to return fuel consumptions of as good as 20km/litre or better!!
[/SIZE]


SOHC VTEC implemented for power is often mistaken as SOHC VTEC-E which is implemented for economy. It is worthwhile to note that the 1.5l SOHC VTEC-E used in the JDM Honda Civic ETi produces 92ps. This is in fact less than that produced by the standard 1.5l SOHC engine's 100ps which uses dual Keihin side-draft carburettors. SOHC VTEC in the D15B produces 130ps. This is 30% more than the standard SOHC implementation !


Examine the SOHC VTEC and SOHC VTEC-E implementations. The clever Honda engineers saw that it is a logical step to merge the two implementations into one. This is in essence the 3-stage VTEC implementation. 3-stage VTEC is implemented on the D15B 1.5l SOHC engine in which the VTEC-E mechanism is combined with the power VTEC mechanism.
Many of us probably has laughed at the poor ignorant layman who said "I want power AND economy from my Honda". We know of course that power and economy are mutually exclusive implementations. Honda decided not to abide by this rule. Now, with 3-stage VTEC, we get BOTH power and economy !.
The diagram below illustrates the 3-stage VTEC implementation. The intake rocker arms have two VTEC pin actuation mechanisms. The VTEC-E actuation assembly is located above the camshaft while the VTEC (power) actuation assembly is the standard wild-cam lobe and rocker assembly.

Below 2500rpm and with gentle accelerator pressure, neither pin gets actuated. The engine operates in 12V mode with very good fuel combustion efficiency. When the right foot gets more urgent and/or above 2500rpm, the upper pin gets actuated. This is the VTEC-E mechanism at work and the engine effectively enters into the '2nd stage'. Now D15B 3-stage works in 16V mode (both intake valves works from the same mild cam-lobe).
Stage 2 operates from around 2500rpm to 6000rpm. When the rpm exceeds 6000rpm, the VTEC mechanism activates the wild cam-lobe pushing the engine into the '3rd stage', the power stage. Now the engine gives us the full benefit of its 130ps potential !
The 3-stage VTEC D15B engine is used on the current EK-series JDM Civic/Civic Ferio VTi/Vi together with Honda's new Multimatic CVT transmission. Stage-1 12V or "lean-burn" operation mode is indicated to the driver by an LED on the dashboard. The 2500rpm cutover from lean-burn to normal 16V operation in fact varies according to load and driver requirements. With gentle driving, lean-burn can operate up to 3000rpm or higher. Stage-3 may not always be activated. The Multimatic transmission has a selector for Economy, Drive, and Sports mode. In Economy mode for eg, the ECU operates with a max rpm of around 4800rpm even at Wide-Open-Throttle positions. The essence of 3-stage VTEC is power AND economy implemented on a 1.5l SOHC PGM-Fi engine. Many people mistakes 3-stage VTEC as a "superior" evolution of the power oriented DOHC VTEC implementation, describing DOHC VTEC as "the older 2-stage VTEC" and implying an inferior relationship. This is totally wrong because DOHC VTEC is tuned purely for high specific output and sports/racing requirements. 3-stage VTEC is in truth an evolution of SOHC VTEC and VTEC-E, merging the two implementations into one.

I made copies of the subject​
[/SIZE][/SIZE]