Gold panning is mostly a manual technique of sorting gold. Wide, shallow pans are filled with sand and gravel that may contain gold. The pan is submerged in water and shaken, sorting the gold from the gravel and other material. As gold is much denser than rock, it quickly settles to the bottom of the pan. The panning material is usually removed from stream beds, often at the inside turn in the stream, or resting on the bedrock bed of the stream, where the density of gold allows it to concentrate. This type of gold found in streams or dry streams are called placer deposits.


Gold panning is the easiest technique for searching for gold, but is not commercially viable for extracting gold from large deposits, except where labor costs are very low and/or gold traces are very substantial. It is often marketed as a tourist attraction on former goldfields. Before production methods can be used, a new source must be identified. Panning is a good way to identify placer gold deposits so that they may be evaluated for commercial viability.
Metal detecting

With a metal detector, a person may walk around an area and systematically scan below the surface. The sensor can give a positive reading for a quantity of gold to a depth of as much as a meter below the surface. As the device is easy to operate and highly mobile, this method of prospecting is very popular among gold miners.
Sluicing 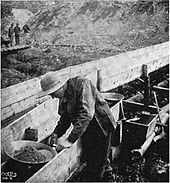 
Using a sluice box to extract gold from placer deposits has been a common practice in prospecting and small-scale mining throughout history to the modern day. A sluice box is essentially a man-made channel with riffles set in the bottom. The riffles are designed to create dead zones in the current to allow gold to drop out of suspension. The box is placed in the stream to channel water flow. Gold-bearing material is placed at the top of the box. The material is carried by the current through the box where gold and other dense material settles out behind the riffles. Less dense material flows out of the box as tailings.


Larger commercial placer mining operations employ screening plants, or trommels, to remove the larger alluvial materials, such as boulders and gravel, before concentrating the remainder in a sluice box or jig plant. These operations typically include diesel-powered, earth-moving equipment, including excavators, bulldozers, wheel loaders and rock trucks.

Alaskan Trommel at the Potato Patch, Blue Ribbon Mine


Although this method has largely been replaced by modern methods, some dredging is done by small-scale miners using suction dredges. These are small machines that float on the water and are usually operated by one or two people. A suction dredge consists of a sluice box supported by pontoons, attached to a suction hose which is controlled by the miner working beneath the water.
State dredging permits in many of the United States gold-dredging areas specify a seasonal time period and area closures to avoid conflicts between dredgers and the spawning time of fish populations. Some states, such as Montana, require an extensive permitting procedure, including permits from the U. S. Corps of Engineers, the Montana Department of Environmental Quality, and the local county water-quality boards.
Some large suction dredges (100 hp+ 10 inch) are used in commercial production throughout the world. Small suction dredges are much more efficient at extracting smaller gold than the old "bucket line" was. This has improved the chances of finding gold. Smaller dredges with 2 to 4-inch (100 mm) suction tubes are used to sample areas behind boulders and along potential pay streaks, until "color" (gold) appears.
Other larger scale dredging operations take place on exposed river gravel bars at seasonal low water. These operations typically use a land-based excavator to feed a gravel-screening plant and sluicebox floating in a temporary pond. The pond is excavated in the gravel bar and filled from the natural water table. "Pay" gravel is excavated from the front face of the pond and processed through the floating plant, with the gold trapped in the onboard sluicebox and tailings stacked behind the plant, steadily filling in the back of the pond as the operation moves forward. This type of gold mining is characterized by its low cost, as each rock is moved only once. It also has low environmental impact, as no stripping of vegetation or overburden is necessary, and all process water is fully recycled. Such operations are typical on New Zealand's South Island and in the Klondike region of Canada.