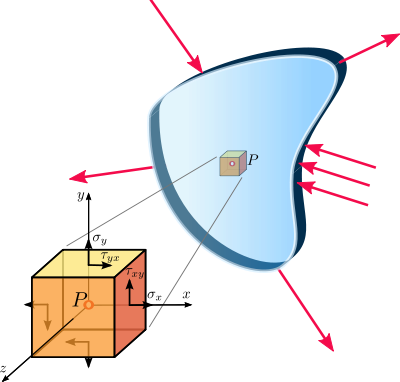 , stresses is zero. This usually occurs in structural elements where one dimension is very small compared to the other two, i.e. the element is flat or thin. In this case, the stresses are negligible with respect to the smaller dimension as they are not able to develop within the material and are small compared to the in-plane stresses. Therefore, the face of the element is not acted by loads and the structural element can be analyzed as two-dimensional, e.g. thin-walled structures such as plates subject to in-plane loading or thin cylinders subject to pressure loading. The other three non-zero components remain constant over the thickness of the plate. The stress tensor can then be approximated by:

. The corresponding strain tensor is:

in which the non-zero

term arises from the Poisson's effect. This strain term can be temporarily removed from the stress analysis to leave only the in-plane terms, effectively reducing the analysis to two dimensions.

If one dimension is very large compared to the others, the principal strain in the direction of the longest dimension is constrained and can be assumed as zero, yielding a plane strain condition. In this case, though all principal stresses are non-zero, the principal stress in the direction of the longest dimension can be disregarded for calculations. Thus, allowing a two dimensional analysis of stresses, e.g. a dam analyzed at a cross section loaded by the reservoir.
[edit] Stress transformation in plane stress and plane strain

in a continuum under a state of plane stress, or plane strain, with stress components

and all other stress components equal to zero (Figure 7.1, Figure 8.1). From static equilibrium of an infinitesimal material element at

and the shear stress

on any plane perpendicular to the

with a unit vector

making an angle of

with the horizontal, i.e.

is the direction cosine in the

direction, is given by:

These equations indicate that in a plane stress or plane strain condition, one can determine the stress components at a point on all directions, i.e. as a function of

, if one knows the stress components

on any two perpendicular directions at that point. It is important to remember that we are considering a unit area of the infinitesimal element in the direction parallel to the

Figure 8.1 - Stress transformation at a point in a continuum under plane stress conditions.

Figure 8.2 - Stress components at a plane passing through a point in a continuum under plane stress conditions.


The principal directions (Figure 8.3), i.e. orientation of the planes where the shear stress components are zero, can be obtained by making the previous equation for the shear stress

equal to zero. Thus we have:

apart (Figure 8.3). The same result can be obtained by finding the angle

which makes the normal stress

, or minimum and maximum normal stresses

, respectively, can then be obtained by replacing both values of

into the previous equation for

. This can be achieved by rearranging the equations for

, first transposing the first term in the first equation and squaring both sides of each of the equations then adding them. Thus we have

which is the equation of a circle of radius

centered at a point with coordinates

, called Mohr's circle. But knowing that for the principal stresses the shear stress

, then we obtain from this equation:

Figure 8.3 - Transformation of stresses in two dimensions, showing the planes of action of principal stresses, and maximum and minimum shear stresses.

the infinitesimal element is oriented in the direction of the principal planes, thus the stresses acting on the rectangular element are principal stresses:

. Then the normal stress

acting on a plane making an angle of

with the principal directions can be obtained by making

Then the maximum shear stress

Then the minimum shear stress

The Mohr's circle, named after Christian Otto Mohr, is a two-dimensional graphical representation of the state of stress at a point. The abscissa,

, of each point on the circle are the normal stress and shear stress components, respectively, acting on a particular cut plane with a unit vector

. In other words, the circumference of the circle is the locus of points that represent state of stress on individual planes at all their orientations.
Karl Culmann was the first to conceive a graphical representation for stresses while considering longitudinal and vertical stresses in horizontal beams during bending. Mohr's contribution extended the use of this representation for both two- and three-dimensional stresses and developed a failure criterion​
ا