Australia could face gold shortage by 2024

The Fimiston Open Pit aka 'Super Pit' gold mine in Kalgoorlie, Western Australia. The site is 50/50 owned by Barrick Gold and Newmont Mining.​
Australia, the world’s second largest producer of gold, could see a major shortage if new sources are not found in the next five years.
Analysis by S&P Global Market Intelligence warns of a drastic drop in gold production to 197.4 tonnes by 2024; down 37.73% from 2018’s official figure of 317 tonnes and down 40.69% if the 2019 forecast of 332.8 tonnes is to be believed.
The forecast output for 2019 of 332.8 tonnes (10.7 million ounces) is worth approximately $19.2 billion, meaning Australia could lose between $7.2 - $7.7 billion AUD, but a shortage in supply for gold could see the global price for gold rise to compensate the lost precious metal or go even higher.
Gold production has increased steadily across the world in the past few years as the gold price has risen. Australia produced 289 tonnes in 2017 according to World Gold Council figures and managed to sharply increase this to a record total of 317 tonnes in 2018. This broke a 21-year record set back in 1997.
Chris Galbraith, a Metals & Mining Research Analyst with S&P Global Market Intelligence, spoke to ABC News about the ‘production cliff’ facing Australian gold mining, and how ageing mines were nearing exhaustion. Galbraith said: “Those have been great mines, they've had excellent lives, but nevertheless all good things must eventually come to a close and they are running out of gold”.
Australia’s position as the second biggest producer of gold could be under threat, with the predicted reduction likely to drop them to the fourth biggest producer by 2024, if not lower. In return, Russia and Canada (and maybe the USA) would overtake the island nation. 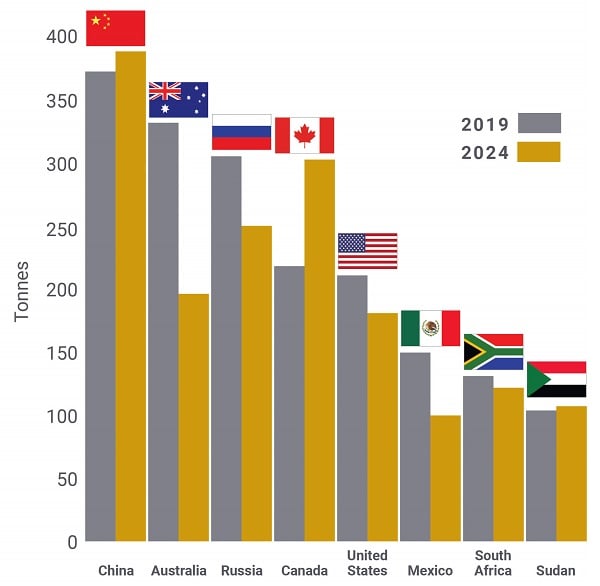 ​
S&P’s research goes further however, predicting a global decline in gold production from mines from 2022 onwards unless new gold sources are found, or new mining technology allows access to presently unreachable sources.
The Australian Bureau of Statistics reports that almost half of the budget for discovering mineral deposits in Western Australia was used to find gold – approximately $641 million. This is $100 million more than the Australian government spent during the mining boom of 2012, suggesting that while there are those – such as the Perth Mint – who disagree with the threat of gold drying up, the government aren’t taking the resources for granted.
Warren Pearce, CEO of the Association of Mining and Exploration Companies, told ABC News that State governments need to invest more, as well as the overall Federal government.
“Australia needs greater greenfield mineral exploration to discover future mines, and there is a real need to increase mineral exploration as the discovery rate has been in slow decline for the last decade.
“Each new discovery that leads to a mine creates jobs, royalties and government revenues as well as a wide range of economic and community benefit