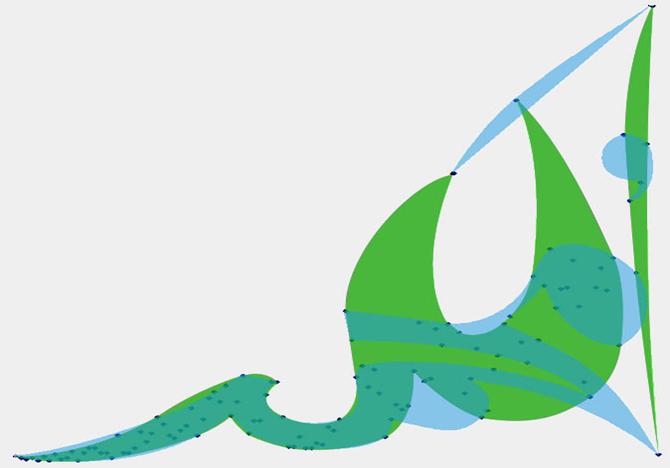 in The Name of Allah The Most Merciful The Most Beneficent​
though mankind and the Jinn should assemble to produce the like of this, Quran they could not produce the like thereof though they were helpers one of another​
Isra 88​
We shall show them Our portents on the horizons and within themselves until it will be manifest unto them that it is the Truth. Doth not thy Lord suffice since He is Witness over all things​
Fusilat 53​
Miraculous Quran​


The plots shown Above are a graphical representation of the Sooras of quran using the Cartesian coordinates. The horizontal axis represents the Soora number and the perpendicular axis represents the number of Ayat (verses) in the soora. For example, the first point in the extreme right represents Soorat Alfateha which is the first Soora in the Quran and consists of 7 Ayat. The next point represents Soorat Albaqara which is the second Soora and consists of 286 Ayat, and so on.​
Now if we connect the outer points in the graph so that all the points are contained within a single frame then the graph will spell the name of Allah in Arabic (الله ) and the name of Prophet Mohammad (محمد ) intertwined in the same figure . In the figures above we have plotted the names separately for clarity only. In fact they can be perfectly matched point by point to spell both names at the same plot as shown in the colored figure. ​
Remarks:-​
1. Getting such a result by a simple graphical presentation of the Quran rules out coincidence. ​
2. Getting both the name of Allah and the name of His Messenger at the same plot confirms this fact. ​
3. The accuracy and beauty of the shape of both words without forcing the words to appear as they do confirm the above conclusions. ​
4. The punctuation marks used in the word محمد is perfectly aligned with the relevant letters which also confirms the previous conclusions.​
5. The method used for connecting the relevant data points fully agrees with the systems used for character recognition in computer programs used for scanning documents, it uses "Neural Networks" concepts. ​
6. Graphical presentation of data was not known 1400 years ago when the Quran was revealed except by the only God Allah.​
7. Allah will hold us all accountable because we have intellect. We are obligated to use our intellect to arrive at the true faith and definite knowledge of the Creator. By thinking of the signs and miracles of the universe and what is in it Humanity will definitely conclude that there is no god but ALLAH. By thinking of the miracles of the Quran Humanity will also conclude that Mohammad is the Messenger of Allah. ​
8. The following mathematical structure proves that there is a definite relationship between the order of the Sooras in Quran and the number of Ayas in each Soora. ​